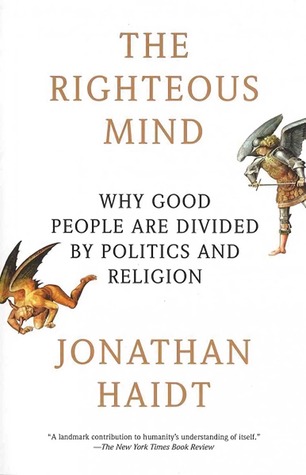 In 'The Righteous mind', moral psychologist examines morality from the lens of evolutionary psychology. Morality is not already present in ourselves, nor is it something we can discover using purely rational methods. Instead, morality is constructed as a set of norms and might vary from culture to culture. Many WEIRD (Western, educated, industrialized, rich and democratic) countries value liberty and the no-harm principle, while other cultures might take respect and disgust into account. For example, many people frown upon incest, even when consensual and with a contraceptive, even though nobody is harmed.

Throughout the book, Haidt uses the image of a person riding an elephant as a metaphor for how the mind works. The rider is the rational mind, while the (much more prominent and stubborn) elephant represents intuition, which determines most of our actions. Our judgments are foremost determined by instinct, while reason merely provides some justification afterwards.

In the second part of the book, the 'taste receptors' for moral judgment are presented: care, fairness, liberty, loyalty, authority and sanctuary. Interestingly, liberal people mainly use care and fairness as core values, while conservatives use the complete spectrum.

The final part is about the chimp-bee duality in humans: why are people both selfish and groupish? Haidt argues for group selection as a mechanism to evolve for a sense of community. Religion, dancing and cheering for a football team are both rituals to increase connectives between people, providing an evolutionary explanation for religion.

So, people at different ends of the political spectrum do not disagree because one has morals and the others don't. They differ because they use a different foundation for these morals.

Those who want to understand how moral beliefs arise and how to reason with people who hold different views than you.