The Flaws That Kill Our Democracy 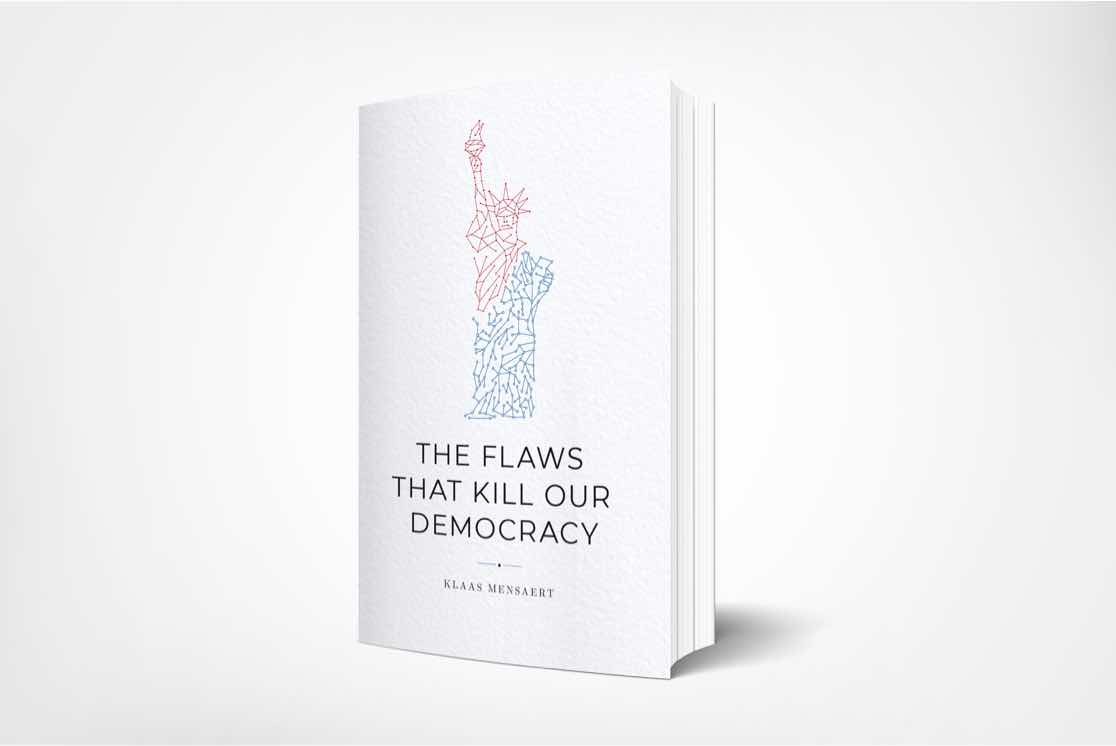 In "The Flaws That Kill Our Democracy", Mensaert discusses the main issues with our current western democratic system, which inevitably leads to polarization, stagnation and corruption. This book outlines an alternative approach based on smaller, specialized inclusive parties. Borrowing ideas from scientific disciplines such as complex systems theory, Mensaert argues that such a system would be antifragile, which would be more tolerant to external lobbying and influence.

It is a thin booklet yet rich in ideas. I immensely enjoyed the scientific approach to democracy. The last part is, relating to voting, is in my option the least well developed (or rather, it discusses the most complicated problem: finding out what people want!)—food for many stimulating discussions.

It has been said that democracy is the worst form of government except all the others that have been tried. - Winston Churchill

With one equal vote for every person, democracy is held as a pillar of enlightenment. As with every system that involves more than two humans, the current implementation exhibits some rampant flaws, from corruption at the top and misinformation and fake news at the bottom. The current state of affairs leaves many people across the political spectrum disillusioned.

In his book, "The Flaws That kill our Democracy", Klaas Mensaert argues for a scientifically-driven approach towards a better democratic system. A democracy should function similarly to the principles of the scientific system. Here, scientists prose, test and publish falsifiable hypotheses, increasing the amount of knowledge in the world. Likewise, a democratic process should be able to establish what people what to happen. Societies problems (energy, migration, climate change, economy, etc.) are complex. Hence these can only be approached from the bottom up. An example of a similar system that works is capitalism. Capitalism, for all its flaws, can generate value and goods via unimaginable complex supply chains for most of the people who are participating. The wondrous thing is that this capitalism is almost completely self-organizing, composed of independent, selfish actors. A fundamental and desirable property of such systems is that they are antifragile: external stresses, errors and attacks do not weaken them; it makes them stronger. Taleb, who coined the term, argues that systems can only be antifragile if their subcomponents themselves are fragile. A capitalistic economy, composed of numerous companies that can go out of business, can be antifragile. Living organisms composed of delicate living cells with constant turnover are Antifragile. The current political system with its large political parties that are too big to fail is not antifragile.

Mensaert argues that in most Western countries, political parties are far too big and far too static. In "Het DNA van Vlaanderen", De Vadder writes that the most remarkable thing that can be said about most Flemish parties is that they are still there after that many years. The most extreme case is likely in the USA, where two old parties completely dominate the political landscape. Such power structures work corruptions and stagnation in hand. Worse, as parties need to profile themselves, this inevitably leads to polarization, making compromises hard.

The book proposes a more decentralized system where many smaller and volatile parties populate the political landscape. This can be realized by two components: specialization and inclusiveness. Specialization means that parties do not need to focus on every single issue but specific problems. An advantage of more focused parties is that their representatives can have more targeted expertise. In addition to specialized parties, the system also needs to be inclusive, meaning it is possible to join or vote on multiple political parties. in this system, a citizen, the freedom to combine parties, leads to a combinatorial explosion of options, meaning that the representation can be as diverse as the voters. In How Innovation Works, Ridley praises the recombination of existing ideas, a concept that could here be incorporated in democracy.

The final part of the book relates to voting. Two tools are discussed here: allowing symmetric voting (i.e., allowing people to express a positive, negative or neutral attitude towards a proposition) and voting aggregations to correct for popularity. By allowing a negative or neutral stance, one can measure how polarizing an issue is. I think this part is the most difficult to implement. The field of preference aggregation is complex and riddled with paradoxes. In all likelihood, it will be hard to design a voting system that is both simple, results sensible outcomes and cannot be gamed.

Here is an example of how I interpreted the ideas of the book. Energy is a hot-button issue now in Belgium, where the green party favours renewables. In contrast, the right-wing party pushes nuclear energy (it is easy to imagine a parallel universe where the opposite would be true). Views on energy are currently linked to the party, complete with all other ideological baggage. In practice, however, opinions are much more diverse. The Ecomodernism movement claims the need for a party that embraces technology and a growing economy and an environmental sense. However, 'Het DNA van Vlaanderen' claims, based on an extensive survey on peoples political preferences, that a party targeted to such people would not enjoy broad support (Flanders has a strong right-left axis both socially and economically). In the world of Mensaert, energy is determined by specialized parties, which can freely be mixed and matched with parties that cater to other issues such as economy and migration.

Systems thinkers who would like to see the democratic system fixed.